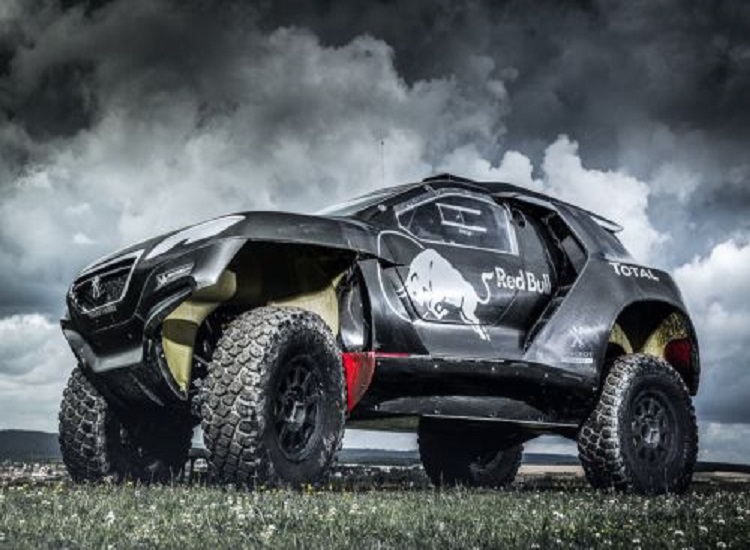 In 2015, the automaker Peugeot will return to Dakar again . Until today, we were shown only a few studio images of the 2008 DKR prototype, which was specially prepared for participation in the rally. Moreover, factory pilots were immediately called. They became Cyril Depre and Stefan Petransel. Carlos Sainz also joined them. It was he who drove on a racing SUV for testing, and the developers finally revealed the dynamic and technical characteristics of the new product. Peugeot – 2008 – dkr

The body panels of the Peugeot 2008 DKR are made of carbon fiber, and underneath is a tubular frame to which the suspension and powertrain are attached. Through the use of rear-wheel drive, it was possible to make a very short front overhang and keep the car at a level of 1, 200 kilograms.

Jean – Christophe Pallet, head of the Peugeot motorsport division, explained that the rear-wheel-drive for the 2008 DKR was chosen for a reason and the result of an analysis of the conditions in which the race will take place. A car with one drive axle is much lighter than an all-wheel drive. Moreover, they have a longer suspension journey ( up to 460 millimeters ), and large wheels are also allowed, which makes it easier to overcome various obstacles .prototype – Peugeot – 2008 – dkr

On the prototype are 17 – inch wheels, which ” shod ” in off-road 37 – inch Michelin tires with remote pressure control.

Under the hood of the Peugeot 2008, DKR is a 3 . 2 – liter V6 Biturbo diesel with a return of 340 horsepower. The power unit located in the base is docked with a sequential six-speed gearbox. Thanks to all this, the maximum speed is 200 km / h. By the way, the fuel tank of the 2008 DKR for its dimensions is very, very roomy – 400 liters. Note that the first race with the participation of the Peugeot 2008 DKR will be held in January 2015.